The MacBook Air is the most advanced notebook computer created by Apple Inc. Extremely low weight and thickness make it ultraportable. The popular diagonal display sizes of MacBook Air are 11.6 inch and 13.3 inch, and all of them currently use SSD storage and Intel Core i5 and i7 CPUs, with a choice of different specifications. However, its disadvantage is obvious as well. Although upgraded, MacBook Air still can not ship with Blu-ray playback. Therefore, its fans and lovers make every effort to find a way to play the high-definition Blu-ray film on their beloved MacBook Air. Finally, it paid off. By the fabulous MacBook Air Blu-ray Player, you can feel easy to have a Blu-ray entertainment on your MacBook Air.

Hereby, we will introduce how to play Blu-ray Disc, Blu-ray ISO file, and BDMV folders on 13″ MacBook Air.

First of all,you should have a Blu-ray drive at hand. (You can buy one whose USB should be above 2.0 from stores or Amazononline)

Step 1: Connect the Blu-ray drive to the 13″ MacBook Air via the USB interface

Insert your BD into the Blu-ray driver and U2USoft MacBook Air Blu-ray Player software will load and the BD will be played automatically. 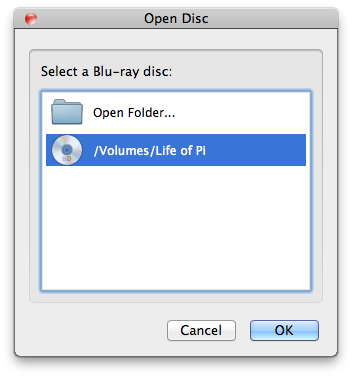 Finally, you can have a great Blu-ray fun on your MacBook Air.

By the way, you can change it into full-screen mode, which will bring you into a more fantastic Blu-ray media world.

How to Play Blu-ray Disc Movies on my MSI Laptop?